A downloadable tool for Windows, macOS, Linux, and Android

Create your own RPG:

The 2D RPG Kit is an asset pack that lets you build classical turn based RPGs in Unity without any programming knowledge! It is easy to use and offers all the tools you need to create complete RPGs. From exploring to turn- based battles, dialogs and a full inventory system, the 2D RPG Kit supports you on your game development journey.

The project is structured in a way that makes the 2D RPG Kit as user-friendly as possible and is suitable for beginners as well as advanced Unity users.

Download  2D RPG Kit The Game, a free complete demo game,  and experience first hand what this tool can do! All project files from the demo are also included to the 2D RPG Kit and will, in addition to the documentation, teach you all functions.

In order to download this tool you must purchase it at or above the minimum price of $59.99 USD. You will get access to the following files:

I haven't looked at the demo just yet but I'm trying to transition away from RPG Maker and towards Unity and think this is a nice bridge to do that. I have a couple questions though. (1) As I learn more C#, will I have the ability to make larger adjustments to the game or will I be limited in the same way RPG Maker tends to limit what you can do? I want to be able to expand on this as I learn more and adjust the battle system to accommodate a concept of mine. (2) Will it be difficult to add or replace assets in this? I bought a decent amount of art assets (tilemaps, sprites, animations, etc.) through some bundles and while some say it's compatible with Unity, I'm not sure how it would interact with this template.

The code of the kit is entirely open so you can go ahead and make as many additions to the functions as you need. Unity generally doesn't limit you with that. You, of course, need to know how to write code in C# :) The same goes for all assets. You can simply import your own sprites and replace the included sprites with them. If you haven't already, I would recommend joining the discord server. You can always ask for help there and other users also share their creations. So you will be able to see how they used their own assets.

Got it. I'll see what assets I have that are compatible with Unity. Thank you for your response!

Hey, just tested the demo, I compiled a list of bugs I think are related to the engine, not the demo. I ignored game-related bugs like typos or enemy misplacement (e.g. the boss sprite is too low on screen) as these wouldn’t be relevant when making a new game. For some, it’s hard to tell if it’s a game-specific setup issue of a framework issue.

EDIT: just after writing this, I realized I was playing the Linux demo which stops at 2.1, so bugs may have been fixed in 3.0 since. I will try again the Windows version, but I don’t want to go through the whole quest again; is there a debug/god mode where I can just warp to the place I want to test? Basically just need a battle with status/buff skills to test all the new features.

Awesome, thank you so much for taking the time and compiling this huge list :D Some of these issues are indeed already fixed with the previous updates. The rest I will take care of with the upcoming update!

Again, thanks a lot. I really appreciate the time you have taken to do this :D

No problem, will update the list after testing the Windows version then!

I want iiiit, just waiting for a sale!!!

Thanks! This asset is the best for making 2d rpg game in Unity with basic knowledge of programming in this engine.  (Sorry for my English, it isn't my native language)

You good, that is fairly standard English. Better than mine lol and I'm native. 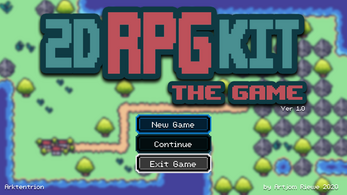 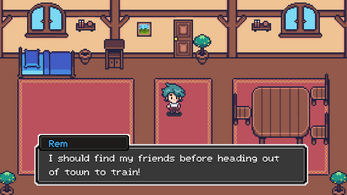 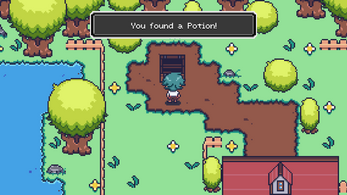 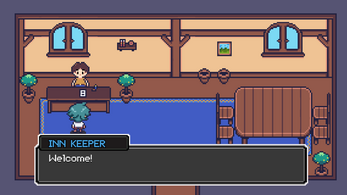 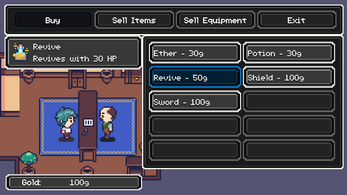 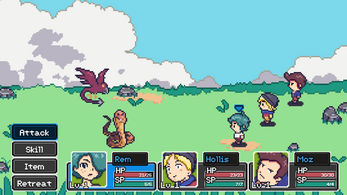 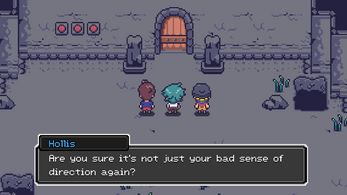 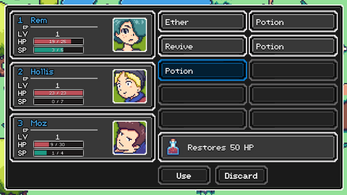 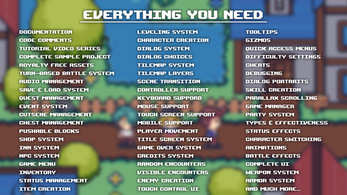